Tests that affect networking subsystem are destined to be error-prone. Network stack acts as a shared environment, so tests can’t really run in parallel. God forbid if you tickle the firewall rules and the test fails to restore the original state. You end up frustrated and cut-out of the internet. Does this all sound familiar? Luckily, FreeBSD provides a handy workaround to all these issues – VNET jails and Rust’s proc_macro_attribute takes the ergonomic on the whole new level.

Consider the following example. You develop a Container Network Interface plugin. Likely you will need to

Any attempt to test this functionality in Rust would result in unexpected obstacles, because tests run in parallel by default and will race for global resources, e.g. create or delete the default route at the same time.

In these tests, the operating system itself becomes the proverbial global state and it is almost impossible to create a reliable test fixture.

FreeBSD pioneered system-level virtualization and had the ability to run multiple network stacks at the same time since version 4.8-ish (that was in 2003). Implementing a Clonable Network Stack in the FreeBSD Kernel.

As of version 12.0, the VIMAGE kernel option has been stabilized and enabled by default. That means we can create so-called VNET jails, jails having their own virtualized network stack.

Starting a new VNET jail is as easy as calling chroot, it’s just a matter of making a single syscall (jail(2)). Of course, rusty bindings are available jail-rs.

Technically, we could create a new jail for each network stack-related test and then tear down the jail without having to worry about cleaning up resources properly. Creating and destroying jails, however, can become cumbersome and impractical in terms of code repetition.

The ideal UX would be to mark a test to be run in a jail, like this:

Tokio and actix among others use proc_macro_attribute to achieve this (example). 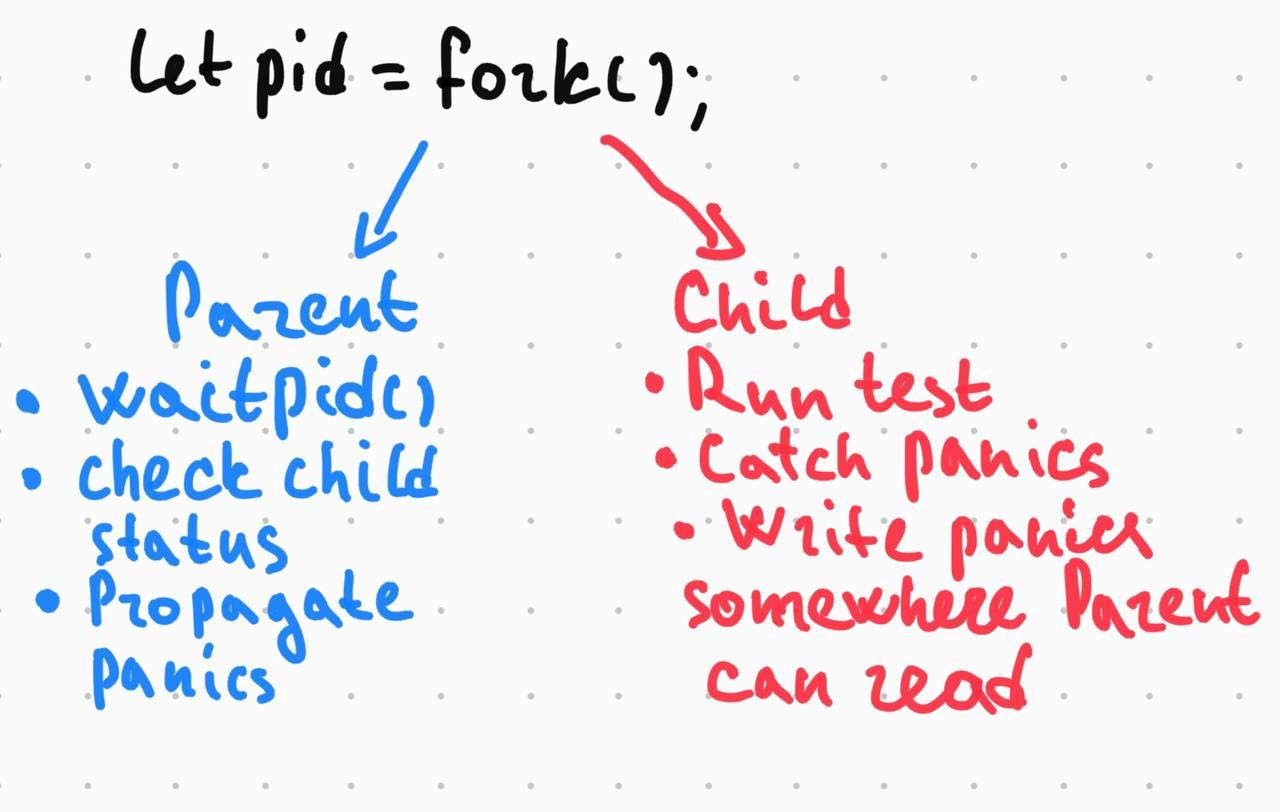 Let’s walk through each step.

Using these libraries, we can write a simple procedural macro attribute that’d be a drop-in replacement for the standard #[test] attribute.

As you can see, we utilize syn::parse_macro_input! to parse the input to get the test name and method’s body.

When we use quote::quote to produce tokens from what seems the regular Rust code with some interpolation.

We are going to use the very limited subset of features provided by syn & quote. Whose who interested in complicated and wonderful things should visit https://github.com/dtolnay/proc-macro-workshop.

First things first, we are going to use third-party libraries to create jails, organize IPC and so on.

Rust procedural macros should live in a separate crate and can’t have public reexports.

This makes an assumption that the crate using macro explicitly depends on jail-rs!

To mitigate this, let’s assume there’s a crate (say, test_helpers) reexporting all dependencies of the procedural macro.

Let’s augment our example to create a jail:

So far so good. We have created a jail, setting vnet parameter to virtualize the network stack and children.max to allow the newly created jail to have up to 100 child jails.

Also we call jail.defer_cleanup() to clear the persist flag and allow the kernel to stop the jail once our test finishes.

However, the test still runs outside of the jail.

Step 2. Putting the test inside the jail using fork and jail_attach syscalls.

In this step, we are spinning a new child process to run test code and putting it to jail. For brevity, I’m going to omit some code annotating the omitted parts using comments, if needed. The full example source code can be found at the end of the article.

The jail_attach() system call attaches the current process to an existing jail, identified by jid.

That’s exactly what we need. We are going to use fork(2) syscall, which creates a child process which is an identical copy of the currently running process.

As we recall, Rust runs tests in multiple threads. Does that mean that after fork-ing the jail

A usual use-case for the fork call is to subsequently call exec or exit as soon as possible, since inside the forked environment one can safely call the limited subset of functions, so called async-signal-safe functions.

The child process has only one thread, corresponding to the calling thread in the parent process. If the process has more than one thread, locks and other resources held by the other threads are not released and therefore only async-signal-safe functions (see sigaction(2)) are guaranteed to work in the child process until a call to execve(2) or a similar function.

Simply put, locks are not released, and there’s a risk of deadlocks in child process.

cargo test basically is a multithreaded program, so we should be extra-careful with locks.

That’s a disaster for our plan, isn’t it? Theoretically, yes, but practically FreeBSD’s allocator jemalloc2 minimizes use of locking. Moreover, jemalloc makes an attempt to free locks using a pthread_atfork(3) fork handler3.

To conclude, tests should not acquire locks (shared with other tests), should minimize the use of global environment, and should generally stick to async-signal-safe functions. While it might sound like a show-stopper for a general case, it doesn’t matter much for our particular scenario, since the tests mainly target the network stack and the stack is unique to each test thanks to VNET capabilities.

This one is fairly simple. We execute the test, child makes some assertions, eventually exits successfully or panics. In the latter case we’ll need to communicate with parent that test has failed & the panic body itself.

Normally, panicking processes exit with a non-zero status, so the parent process is able to tell that a child terminated abnormally (with zero signal). At the time of writing, however, this is not the case due to this bug, so we’ll need to implement a workaround.

The workaround I came up with is brain-dead. We are going to abort the process, and the parent will be able to distinguish this situation via waitpid(2).

So the plan is: first catch the panic, then abort. Yup, to the code.

Not every panic unwinds Panics in Rust can be implemented as aborts to save that precious disk space. Our trick won’t work in this case.

Step 4. Child communicates test results to parent via some form of IPC.

Parent & child have their own address spaces. That means we can’t use the heap to communicate the exit status.

However, we can create an anonymous memory-mapped region, into which the child can write, and from which parent can read.

How will we serialize the panic? It turns out, the result returned by std::panic::catch_unwind contains an error, which can be downcasted to a string. Different approach are possible here, we are going to use bincode library for (de)serialization.

One additional limitation imposed here is the memory map size. It’s 1024 bytes, which’s enough for relatively short panics. Think of panics generated by diesel or any other library with complicated types.

Step 5. Parent waits for the child process and propagates the results to caller.

Almost there. Now, parent needs to wait for the child to complete (either exiting sucessfully or issuing a SIGABRT signal). Let’s not forget to tell the kernel that we don’t need the jail anymore by clearing the persist flag.

Although async-signal-safety imposes many limitations on the forked environment, for this case the ability to not worry about restoring the network stack state after a test run and the ability to run such tests in parallel outweighs the reduced safety guarantees.

That’s it folks. Can’t stress this enough, don’t use this technique in user application code.

The full macro code alongside boilerplate is available on GitHub.

The examples of tests using this macro can be found there as well: